Blogging is hard. I have this urge to blog but then I never succeed. I make up excuses like, I don't have anything interesting to say. I don't know who my audience is. Am I really saying anything different than one of the other gazillion blogs out there? And finally I think that my posts are boring and that I don't have a cohesive theme running through my blog; I don't have a vision.

I think this might be changing. I have a plan. I will be writing about my journey to acquire a driver's license at the age of 31. I will track my progress and my thoughts as I go through reading the guidebook for the permit and then the in-car driving 'lessons'.

It may be humiliating. It may be humorous. Either way, it will be fun for you and me. Plus, it will keep me accountable. I do not want to be writing a blog post in 1+ years saying that I was trying blogging again and still didn't have my driver's license.

Posted by Beapedia at 9:07 PM No comments:

It's Halloween and officially Fall. Time doesn't shift until next week but you can already feel the change. It's dark when I get up and dark by the time I'm leaving work. I'm putting on more layers and my scarves are a permanent accessory around my neck. While I don't mind the cozyness of fall clothing, there is one consequence of Fall I did not anticipate -- toting a heavier shopping bag back from the farmer's market.

Why? You don't understand the connection? Short and simple explanation: root vegetables. One of the many reasons food pundits extol the virtues of farmers market's is buying from local producers and buying seasonal food. Well, in the fall that means filling your bag with beets, carrots, parsnips, sweet potatoes, squash of all varieties and brussel sprouts. The fruit? Same story, apples and pears galore, but they too are quite solid.

In the summer I overload my bag with berries but they don't pack quite the same punch in terms of heft. In the summer, I'm worried about the berries being bruised by the time I get home. In the Fall, I'm worried that my legs or hips are the ones bruised.
Posted by Beapedia at 7:49 PM 3 comments:

This blog has 7 lives.

Featured for my colour sense.

About a month and a half ago, I think, my family was invited to the grand opening of the Hermes store in Manila. It was quite the soiree with all the glitterati of Manila's society and lifestyle pages in attendance. Photogs were everywhere taking pictures of all the ladies in their dresses. My and my sister included. Turns out, I was featured in one such newspaper for my combination of a fuchia dress and turquoise bag.

The picture sucks (the quality, not me), but here it is:

and you MUST read the accompanying article. I chuckled in sheer amusement. I guess I can call myself an A-list lady now who is "beautiful, glamorous and amorous." I don't think I've ever used those adjectives in that combination to describe myself, but sure, I'll go with it.

Oh, while on the subject of the Hermes launch party. I would like to introduce you to the Filipino Jonas Brothers:

I don't know who they actually are but I think I can safely assume they're models. As my sister says, "they're good looking all together, but separately they're only meh." I didn't assign Jonas Brothers names to them, but it still works.

Filipino Jonas Brothers, champagne, fabulous people watching and now being featured in a newspaper. That night just keeps on giving.
Posted by Beapedia at 2:52 PM 2 comments:

It would seem that my first foray into blogging didn't go very well.  I'm really sorry friends, I had every intention of blogging about my extended vacation time in Manila but I just never got into it. Writing about my everyday life in Manila just didn't get me excited to blog. I realize now that what I considered to be mundane and un-significant, you would probably have found very entertaining. For example, I'm sure you would have loved to hear about things like maids, drivers and my endless consumption of buko juice at the Polo Club (or not).

So I'm going to try again. This time about my move and adjusting to Toronto; Canada's most hated city. Maybe this time it will be the reverse problem. I'll find things hilarious and fascinating, but you will find it utterly boring. I guess we shall see.
Posted by Beapedia at 11:58 AM 1 comment:

In 48 hours, I will be on a plane to Toronto, Canada. I'm super excited, but also have that nervousness (butterflies in the tummy) that accompany something big and new. So, in honour of my 24 hour transit including 14+ hours on a plane, here is my ode to my favourite airline.

I think Cathy Pacific is the best airline in the world (well, maybe 2nd after Singapore Airlines but I don't fly them so it doesn't count). Every year I make the 24 journey from eastern Canada to Manila and spend a considerable amount of time in the air. Yes, I've become really picky about the airline I fly. For that particular flight, I really am picky. I don't pick the cheapest airline I can find. I seek out Cathay and go with them even if the ticket is a bit pricier. You really do get what you pay for. The staff is always courteous and helpful. The cabins are clean (and the bathrooms get cleaned mid flight), the food is decent, there is plenty of food to eat in-between meals, every seat has its own tv and the movies are on demand! There really isn't much not to love.

In the past week, I've noticed that Cathay has launched a new ad campaign with tv ad and a supporting microsite. Their current message "Great service. Great people. Great fares." To quote the Cathay site, the campaign focuses on the staff who went the extra mile to make you feel like you are somebody.

I love the tv ads, I find them simple, humorous and completely effective.

Why I love it: I don't looove this one, but it plays a part in my overall love of the campaign.

Why I love it: You can just hear the daughter thinking, "ugh, why is my Dad sooo uncool?!"

Why do I love it? I can sympathize. I totally avail of the cup noodles in the middle of the flight; it's a perfect mid-fight snack.

Overall, the tv spots do more than just tell you about the great people and the great airline. They feature the different classes (with people in seats!) of Cathay Pacific and show you, not tell you, that regardless of the class you decide to fly, you will always receive the same level of quality service.
Posted by Beapedia at 6:37 AM 1 comment:

"I thought it would be bigger"

I think that I'm pretty lucky and have seen some amazing sights during my extended vacation. I might not be doing a hardcore backpacker-style trip, but I've still been taking in new sights and sounds. One thing though that strangely keeps happening to me is that I get to a certain well-known spot and think to myself "huh, I thought that would be bigger".

This is not to say that these attractions aren't stunning, breathtaking and everything you wanted it to be, but still... just not as big as I thought. Here are the three that elicited that response. 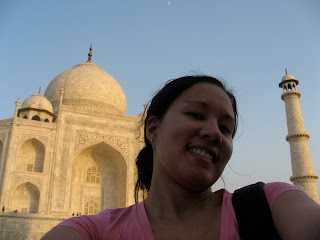 Oh the Taj Mahal, the ultimate monument to undying love. When I made the exclamation of "I thought it would be bigger" my travel companion looked at me, laughed and asked "well, how much bigger could it be?" Good point. This was when I realized that the mythology of the Taj Mahal is what made it so huge in my head. You always hear so much about the Taj Mahal; the architecture, the history, the Diana-visitng-alone story and most recently the scene from Slumdog Millionaire.

Naturally, it's the destination for all who visit India. So despite the crowds, the touts and the long lines, being able to sit in the gardens and admire the extravagant tomb is worth all the effort. Everything was beautifully proportional and it really is a sight that you shouldn't miss. Do I now think it should have been bigger? Not really. It's quite perfect the way it is. 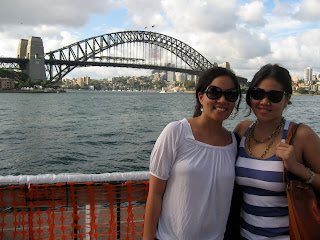 I grew up spending many a summer in San Francisco with the Golden Gate Bridge in the background. The iconic red suspension bridge was unforgettable and I recently realized that it had become my basis for all bridges.

One summer my Mum decided that she needed to get the kids out of the house and so we ended up walking the Golden Gate Bridge. It took us about two hours, and so from that experience I thought that the Sydney Harbour Bridge would be the same.

Although it wasn't nearly as high or span the same expanse, it still pretty damn cool. For me, it will always be associated with the 2010 new years eve celebrations. Without a doubt, the fireworks that are shot off the bridge and off barges in the harbor are the best new year's fireworks I've ever seen. You can't look away because you're afraid you'll miss out on the next spectacular display. I'll also never forget sitting on a curb at 1am waiting for the bridge to open so that we can walk home to North Sydney and upon reaching the first tower Risa exclaiming "P*ta! We're only at the first pile-on?!?!" Hmm...not so small at 2am. 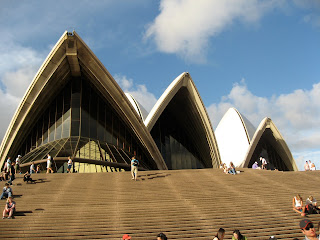 Similar to the Taj Mahal, I think I had just built up the Sydney Opera House to be gigantic in my head. It has iconic status in the pantheon of architecture and the story behind its build is equally impressive. Soo many years, an overinflated budget. Those project managers must have been pulling their hair out!

The Sydney Opera House is massive and I bet it feels even bigger when you go inside. Unfortunately, I didn't get to catch a performance of some sort while there so I had to admire from the outside. The sails are indeed spectacular regardless of which side you're looking at it. It's also amazing looking at the details of the opera house. Back in Manila, Risa and I watched a documentary on the opera house and we were even more amazed with the structure. If only we had known about the details before.


As a final note, although I found these structures smaller than expected, the details that were present in all the structures more than made up for that. So there you go, the very big also has the very small.

Nothing but amazingness.
Posted by Beapedia at 7:45 AM No comments: