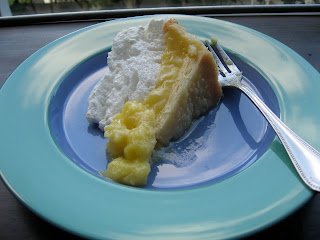 One of the first things I did when I arrived in Manila to begin my extended vacation was to go and buy my favorite Filipino style brioche buns. While at their cafe/bakery, I noticed that they had increased their offering to other goodies such as brownies, cookies and lastly, lemon squares. Being a fan of lemony desserts I bought a small box of them and couldn't wait for the tangy lemon burst. Alas, it was not to be. The square was fluffy instead of a curd on top of a cookie base, and was too sweet for my taste buds. Most disappointingly of all,  it was lacking that distinct bright lemon flavor I was looking forward to.

Fast forward a month and I'm still thinking about lemony desserts. As far as I was concerned, there were three possibilities to satisfy my lemon craving: lemon bars, tart au citron or lemon meringue pie. I hadn't made any of them but I'm a good baker, how hard could it be?

Thanks to the a dinner at home, I was tasked to make a Lemon Meringue pie for dessert. It would be a nice ending to a 'fusion' dinner of roast beef and paella; surf and turf Pinoy style I'm told. I really think it's just my family's style.

So off I went. The curd was incredibly easy to make. Everything got stirred together off the heat and then was placed on the heat to cook up and become shiny and gelatinous. It's actually quite amazing watching it come together. The recipe I used said to whisk the mixture over heat until it was thick enough to coat the back of a wooden spoon; pretty standard. However, standing over a hot stove in the late afternoon was not fun. Waiting for the curd to thicken up felt like forever. I felt as though I just kept whisking and checking, whisking and checking. No thickening to be seen. Then all of a sudden, everything came together. The curd was thick, it was bubbling around the edges and I could see the streaks of where my whisk had just gone through the mixture. Beautiful. All done.

The crust on the other hand was a different story. I had made a pie crust for our Xmas dinner Pecan Pie so all I had to do was thaw it. As usual, I stuck it in the fridge to thaw. That was a mistake. It didn't thaw as quickly as I had hoped. So, I stick it in our fancy oven for some convection style thawing. This time is came out too soft and I had to semi-roll it and then stick it back in the freezer to firm up. The key to a good and flaky crust is to make sure your ingredients are as cold as possible. So if you are rolling out a room temp crust, the butter will already be too soft and won't melt properly during baking, thus giving you the requisite flakiness.  My pie dough went in and out of the freezer too many times to count. I was so paranoid that I would end up with a tough crust. You can imagine my relief when I finally put the crust in the oven. Unfortunately, our ovens at home don't seem to like browning crusts too much so I ended up with a somewhat pale crust. Oh well.

Finally! Curd was poured into the crust and popped into the fridge to set, and I get to forget about it for a couple of hours. The last step was the meringue which was super easy with my Mom's high powered Kitchen Aid mixer. I swear, that thing is older than I am and I have made many many cakes with that workhorse.

Meringue piled high (maybe too high) on the pie, back in the oven for some browning and we're good to go! Yes, it was bright, tart, sweet and lemony all at the same time with the light sweetness of the meringue for balance. Mission accomplished. 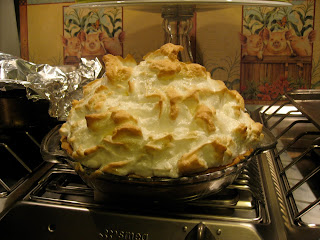