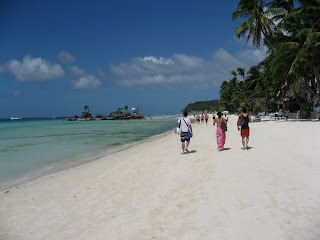 The beautiful Boracay white sand beach. Left to right: Chino, Risa and Migs.
A bit of background: Boracay is known in the Philippines as an idyllic paradise island with a beautiful long stretch of powdery white sand and calm, turquoise sea. Legend has it that if it wasn't for  tiny sand fleas that reside on Boracay, Imelda Marcos would have claimed the tropical paradise in her infamous "Mine-ing" period. In the last 5 or so years, Boracay has become THE destination spot for city folk looking to escape the blazing summer heat of the city but still party it up in style.

Personal background: Last time I was in Boracay was in 1999 on my senior beach trip. For my friends with whom our shared history starts in 1999 or later, that beach trip has now joined the ranks of legend at our high school, ISM. Our graduating class is known as the class that wrecked it for all the subsequent years. What did we do? We acted like typical 17 years and had some fun on the longest party strip in the country; we partied like it was 1999.  Oh, did I mention we weren't supposed to do that and that our chaperon decided to be an asshole and rat us out when he looked the other way with other years? Details. 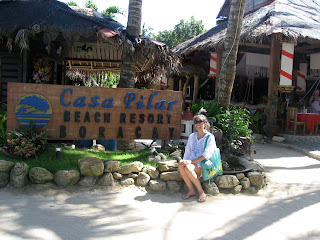 Scene of the 1999 crime. Well, we stayed here, the drinking was elsewhere.

Current day: The balikbayans (me and Migs) needed to go to Boracay. You can't not see it. Plus, it had been almost 11 years for me and Migs had never been. Risa and her bf, Chino, had been lots of time but were always up for a beach trip. Seriously, how do you turn down a beach trip? You don't. So we picked a weekend, looked into and booked our flights, found a place to stay and got excited. We planned where we wanted to eat (good eats down on the island) and what we want to do. We wanted to go Zorbing (get in a human hamster ball thingy and go down a hill) but it didn't quite make it. 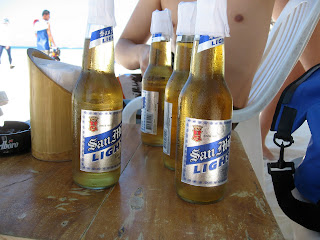 Requisite cold San Migs.
So what did we get up to? A lot of sunning ourselves on the beach, swimming, drinking fruit shakes, boat rides and general beach bummyness. The sand is everything it's cracked up to be, soft, powdery and luscious underfoot. There were times that we were walking up the beach that I would drag my feet as I walked just to fully engage in the tactile sensation of the sand.

Prior to going to Boracay, my sister had warned me about all the development that had taken place on the island. What used to be a chill, beach resort of an island is now an hip and happening party destination. I didn't quite understand what she meant because I feel as though for as long as I can remember, people have been saying how developed Boracay has become. This time it's different. Boracay has a STARBUCKS right on the beach. It looks exactly as it would in the city, except that you can sit on the sand with your double shot mocha latte no foam. Yeah. I know. Also, you have your choice of Pinoy pizza chains: Yellow Cab or Shakeys. A shocker but kinda amusing at the same time.

Even with all the crazyness, Boracay is still awesome and we were lucky enough that we didn't stay in the main thoroughfare. We stayed in the area known as "Station 3" at the southern tip of the island. No one from Manila stays in that area it seems. Pinoys prefer to stay around Station 1 and 2 in the top half of the island. Our area was mostly Europeans and backpackers. It was definitely nice being able to partake in the island crazyness when we wanted and then retreat to our little nook of the beach. 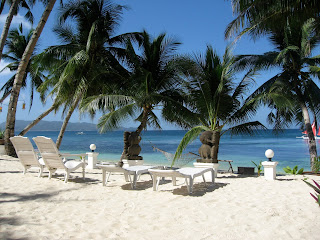 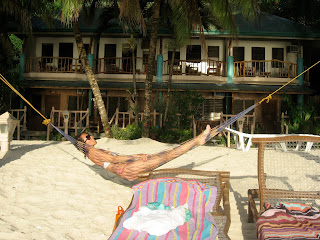 Tough life. Napping in a hammock at the resort. 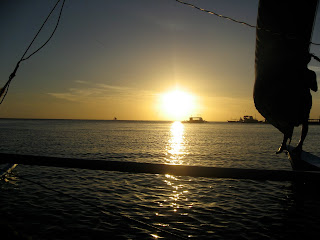 Sunset paraw ride. We brough a bottle of wine and passed it back and forth as we sailed along. 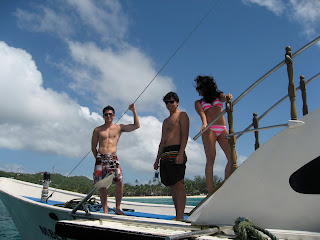 Look at those posers! This is us looking happy on the "big boat" before our "Ikot Boracay" adventure. That story will have to be it's own post.
Posted by Beapedia at 3:00 AM