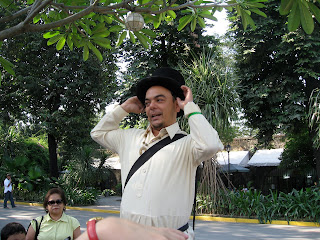 (Carlos Celdran starting the tour)
I first heard about Carlos Celdran about 6 years ago when I was home for what I like to call my "quarter life crisis break." All I knew about him was that he was some guy that lead entertaining, animated tours of Intramuros, the old walled city of Manila. I thought to myself "Awesome! That's something the city sorely needs" but stopped short of hunting him down and going on a tour myself. Over the years, he's become quite the local celebrity. Everyone knows about Carlos Celdran tours; my sister's friend had it as a pre-wedding event for her out of town guests. Now that I'm home again, I was determined to finally go on one of his tours and experience it for myself.

Because Carlos' tours are about two hours long and he does two in a day, I had to get up pretty early on the Sunday to make it out to Intramuros. My touring buddy? Migs Roxas, childhood friend that is now living in Sydney, Australia. He was in Manila from Sydney for an internship and he too figured that some culture would do him some good. So off we went, the transplated Pinoys to revisit our history. Joining us on the tour was a delighful mix of locals, foreigners (white people) and balikbayans (people like me and Migs). Risa has told that he is now featured in the latest edition of Lonely Planet Philippines which has for sure added to his popularity. 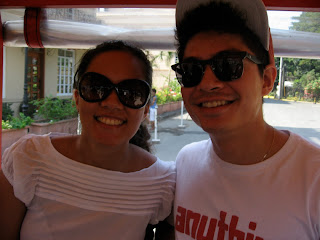 (The Balikbayans)
At this point I should note that I did take a Philippine history class in high school. However, it is more from my own love of the subject matter rather than an inspiring teacher and stimulating class that I remember a lot of what he told us. So I am not completely ignorant, but I'm also a geek, love history and love seeing how people tell stories.

Back to the tour. We stated off in Fort Santiago with Carlos telling us that the tour is what you would call "a history lesson for people with ADD". He started using our language as a metaphor to show how mixy-matchy our actual culture is. Some of our words are indigenous Filipino, more Malay than anything else and only refer to certain aspects of life. Mostly, the non material things like the sky, spirit, heaven, stars.... Any Spanish words are related to things, pencils, chairs, clothes. American words? They're all brands. Filipinos call toothpaste colgate and film (when we used to use film) Kodak. His fave example is that when Pinoys want to take a picture, we can "kodakan". It's the same principle as when we now say "I'm googling him." The brand name has become a verb.

I loved that he started off the tour with an examination of language. Perhaps it's because I've always living in multilingual environments, with multilingual friends, or perhaps it's because I've spent the last 10 years of my life in Quebec where language is a polarized and highly politicized topic, but I completely, 100% believe that language is a repository for culture. Understanding how a language works, give you a lot of insight into a culture that are otherwise difficult to pinpoint. 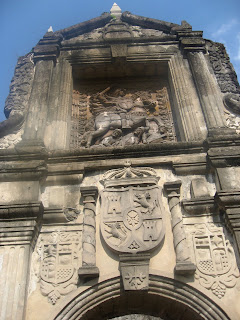 Entrance to Fort Santiago. If I remember correctly, the Spanish Conquistador is on his horse ready to kill the Muslims.
From that point, Carlos took us on a tour of the history of Manila starting with the Spaniard finding the little nipa huts and the small Muslim village ruled by Rajah Sulayman and how the islands became Hispanized, or more like, Catholicized. Through to the end of WWII when everything changed. The most intriguing stories were probably the years after the turn of the century until WWII. The "golden years" of Manila, the years when she really was the Pearl of the Orient.  The images and stories he told are all ones that I've heard, but can't really imagine anymore. It just seems so far from the world we know today.

The standout part of the tour was when we were switching over from the Spanish period to the American period. Carlos follows what is known as a Revisionist telling of Philippine history. He does not follow the standard Agoncillio telling (a standard textbook that every Pinoy kid has probably read) but rather take the more Western approach to Philippine history and doesn't consider June 12, 1898 as independence day, but rather looks at July 4, 1948 ('46?) as our independence day.

Why is this shocking to me? Well, because I'm not sure how many of the Filipinos know that our date of independence varies depending on this historian you read. As Filipinos, we are told that we won our independence from the Spanish through the Revolution in 1898. This is the date that is widely celebrated and this is the date that you are supposed to know. The rest of world's historians see it as a Revolution, but also considers that the Philippines was sold to the Americans as part of war payments for the Spanish loss in the Spanish-American war. All that to say, I wonder what the locals were thinking when he said that. He didn't make it a big deal of it and no one asked any questions afterwards.

All in all, the tour was awesome. He was entertaining and I'd tell anyone visiting Manila to go on his tour. Definitely entertaining and a great "Cliff Notes/ADD Kid friendly" history lesson. Next up for me? His Imelda tour!! Bell bottoms here we come!! 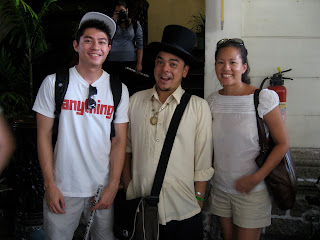